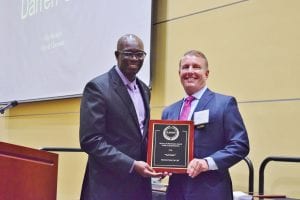 The University of Central Florida (UCF) honored Gray with the 2019 Alumni Achievement Award in Public Administration on May 7 at UCF’s Morgridge International Reading Center. The ceremony was held during Public Service Recognition Week.

“Darren has demonstrated incredible success in leadership in public service,” said Naim Kapucu, Pegasus professor and director of UCF’s School of Public Administration. “As the city manager of Clermont, he has elevated the community through his initiatives rebranding the city, rolling out its master plan and stimulating economic development. All the while, he continues to generously give back and support the UCF School of Public Administration, its programs and its students as an advisory board member, a guest lecturer and a mentor.”

Gray earned his bachelor’s and master’s degrees in Public Administration at UCF in 1996 and 1998, respectively. He began his local government career at Orange County in 1996. Gray served as Clermont’s assistant city manager from 2004-2010 before being recruited by Lake County as their county manager from 2010-2012.

In 2012, Gray returned to Clermont as city manager of Lake County’s largest city, overseeing a $149 million annual budget and over 400 employees.

“Clermont is an extremely fortunate city to have someone with Darren’s knowledge and foresight to lead us as we grow,” Clermont Mayor Gail Ash said. “It’s his master plan and ideas that have taken Clermont to such a high level that we are sought after by these businesses and residents. He is most deserving of this recognition.”

Gray led Clermont’s community visioning process, which resulted in the 2014 rebrand to “Choice of Champions” and the 2015 adoption of the city’s master plan to revitalize Clermont’s Downtown-Waterfront District. As a result, the city has made record investments in capital projects to stimulate economic growth and business development, capitalizing on the city’s reputation as a world-class destination for amateur sports and athletics. Gray managed the city as it earned numerous honors, including Best Central Florida City to Live In, Best Central Florida City to Launch a New Business and Top 20 American Cities Leading the Way in Economic Development and Quality of Life.

“It’s an honor to return to my alma matter for this recognition,” Gray said. “There’s no other school I’d rather represent, and I owe a great deal of my success to the quality education I received here at UCF.”